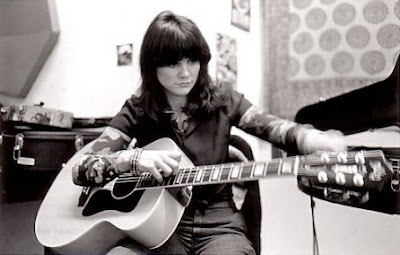 Linda Ronstadt, a versatile interpreter of American popular songs both norte and sur, was one of the premier voices of the 1970s and early 1980s. I first saw her perform in a bar with peanut shells on the floor in San Diego, just before she became a superstar with her album "Heart Like A Wheel" in 1974. I waved, but I doubt she remembers.

A "No Depression" blogger, in the course of atoning for things he wishes he hadn't said over several beers, offers a compilation of quotations from and about her, including this 2000 look-back at her roots:

I remember the Byrds were happening and doing folk-rock, and I thought, there you go. So I went to the Troubador. I grew up singing Mexican music, and that's based on indigenous Mexican rhythms. Mexican music also has an overlay of West African music, based on huapango drums, and it's kind of like a 6/8 [time signature], but it really is a very syncopated 6/8. And that's how I attack vocals. Rock `n' roll comes from black music, and I came from Mexican music.

Whether any of us understood that or not, let me just say this: She's the only person in the world you probably want to hear sing "Tumbling Dice" besides Mick Jagger. I remember reading that he stopped by the studio to make sure she had the lyrics down. Her 1977 version features the mighty bass guitar and the backing vocals of Kenny Edwards, who died in August.
By Fr. John at 10:11 AM