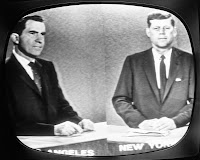 Fifty years ago last night, Richard Nixon and John F. Kennedy, though a continent apart for the third of their four presidential debates, still managing to peek over one another's shoulders. Afterward, Nixon accused Kennedy of cheating by using notes. Kennedy and his staff admitted he'd had one, then two documents that he used for quotations.

For its blog, the LA Times unearthed the clipping of its article about the controversy, written by one of the relatively few reporters Nixon trusted at the time, Lou Flemming. The blog gratuitously recaps Nixon's famous perspiration problem, which was an issue for the historic first debate on Sept. 26 but evaporated for the next three. Some felt Nixon won on Oct. 13. Too bad 20 million fewer people were watching.

Hot off the presses, a couple of highlights.

Kennedy at his deftest, parrying a thrust by Thurston Morton, GOP chief, who had said Kennedy owned Nixon an apology because Harry Truman had said that he and his party could go to hell:

Mr. Truman has his methods of expressing things. He's been in politics for 50 years; he's been president of the United States. They may - are not my style. But I really don't think there's anything that I could say to President Truman that's going to cause him, at the age of 76, to change his particular speaking manner. Perhaps Mrs. Truman can, but I don't think I can. I'll just have to tell Mr. Morton that. If you'd pass that message on to him.

Nixon on the religion issue (which in 1960 was Protestant anxiety about Kennedy's Roman Catholicism), a text that Islam-bashers like Newt Gingrich should study:

[A]s far as religion is concerned, I have seen Communism abroad. I see what it does. Communism is the enemy of all religions; and we who do believe in God must join together. We must not be divided on this issue. The worst thing that I can think can happen in this campaign would be for it to be decided on religious issues. I obviously repudiate the Klan; I repudiate anybody who uses the religious issue; I will not tolerate it, I have ordered all of my people to have nothing to do with it and I say to this great audience, whoever may be listening, remember, if you believe in America, if you want America to set the right example to the world, that we cannot have religious or racial prejudice. We cannot have it in our hearts. But we certainly cannot have it in a presidential campaign.