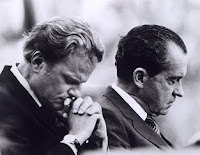 [Anderson's mentor] Drew Pearson was a liberal, very ideological and, like Nixon, was a Quaker. But he was a pacifist compared to the fundamentalist, almost evangelical strain of Quakerism that Nixon was raised in. He was very much of what we'd call a born-again Christian today.

This book review by Chuck Fager includes accurate surveys of Nixon's faith journey and the struggle between fundamentalist and modernist Quakers in the early years of the 20th century. There's no question about the side of the divide on which Nixon ended up. His discipleship at Whittier College under one of the leading modernists, J. Herschel Coffin, swept away all Sunday School notions:

[A]s a result of Coffin's tutelage, ...college senior [Nixon] wrote, "My beliefs are shattered....My religious thinking has been revolutionized...." Vanished, he noted, was biblical literalism, even faith in the physical resurrection of Jesus. In their place was--what? Nixon's essays point toward a mid-thirties Protestant liberalism, focussed on "God as creator of all things," and the vaguely described "religion of Jesus" as a model for personal and social uplift, a model which included a commitment to a strengthened League of Nations.

Feldstein would have done well to study the intersection of politics with conservative Protestantism as carefully as Sam Tanenhaus has done. As Whittaker Chambers' biographer recently showed, Nixon's liberal Republicanism made him the target of the conservative Protestants who moved to take over the GOP in the 1970s.

On "Fresh Air," Feldstein made other questionable assertions, including by saying that while he was in the White House Nixon "pocketed" the $100,000 than industrialist Howard Hughes gave Nixon buddy Bebe Rebozo. I don't believe the money made it out of Rebozo's safe, but maybe Feldstein's learned something new. I've just Kindled the book. When I was running the Nixon library, Tricia Nixon Cox's lawyers falsely claimed that Rebozo had said he didn't trust me with his money, so the least I can do is try to keep the facts straight about what he did with Hughes's wad.
By Fr. John at 1:24 PM