Illegal Immigration Down, Anxiety Up 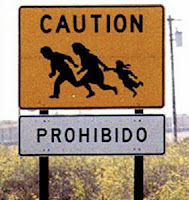 Thomas B. Edsall argues that in the politics of the coming "age of austerity," the poor will prove to be convenient scapegoats as budgets are cut at all levels of government. Immigration is a harbinger of the trend:

The rise of illegal immigration as an issue this cycle doesn’t correspond to material facts. The number of aliens pouring across the border is not increasing. On the contrary, the recession and improved enforcement have drastically reduced it. What is increasing is anxiety about resource competition. And that’s exactly why immigrants cause so much agitation: They are perceived by many voters as one giant, undeserving resource suck. In June, Gallup asked, “Which comes closer to your point of view, illegal immigrants in the long run become productive citizens and pay their fair share of taxes, or illegal immigrants cost taxpayers too much by using government services like public education and medical services?” Among all voters, 62 percent perceived immigrants as a resource drain. Among Republicans, the number concurring with that dim assessment rose to 78 percent. You’ll often hear Republican immigration proposals—rewriting the Fourteenth Amendment’s guarantee of citizenship, for instance—dismissed as political suicide. I would argue that it shows the GOP’s astute understanding of the new zeitgeist.