"Hereafter" Gave Me The Dickens 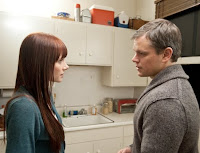 In Clint Eastwood's masterpiece "Hereafter," Matt Damon plays a reluctant psychic named George Lonegan who has just one dishonest moment which may actually amount to the same kind of leap of faith theologians have been taking for centuries. A little boy named Marcus (played by both Frankie and George McLaren) has pestered Lonegan into giving him a reading about his late brother, Jason (ditto). When earnest but fairly routine brother-to-brother advice from the great beyond doesn't satisfy Marcus ("You're on your own now, he says"), a calculated look crosses the psychic's face. "He's come back," he suddenly says. The next round of ghostly advice is far more reassuring. "If you're worried about being on your own, don't be. You're not," Lonegan tells Marcus (the bit from the trailer). "You're in him, and he's in you. You're one."

It was pretty clear, at least to me, that Lonegan made the second speech up to make the kid feel better. Or maybe it was inspired revelation. Either way, he was creating doctrine -- sort of like the gospel plus St. Paul plus church tradition. Eastwood and his scriptwriter, Peter Morgan (with whom I briefly discussed matters of faith when he visited the Nixon library several years ago), portray just two supernatural things as true: Lonegan's authentic insights about people in the afterlife and the near-death experience of French TV journalist Marie LeLay (Cecile de France). Such nonsectarian universalism, though insufficient for and even offensive to doctrinaire Christians, was far too churchy for LeLay's producer boyfriend and others in her rigidly secular milieu in Paris, especially after she insists on talking and writing about the visions (welcoming white light and so on) that she experienced when she nearly drowned during the 2004 Indonesian tsunami.

When she and the boyfriend are reunited after the disaster and embrace, you can't imagine them ever letting go. But he does soon enough, after LeLay keeps asking what he thinks heaven's like and he decides to sleep with her on-air replacement. The world's brokenness all too often rips asunder those who love one another, like little Marcus and his drug-addicted mother, and even kills love aborning, as with Lonegan and Melanie (Bryce Dallas Howard), who meet in a cooking class in San Francisco. These scenes are the most charming in the movie. In an inspired bit of casting, the teacher is portrayed by Steve Shirripa of "The Sopranos," who plays Nessun dorma and Che gilda manina in class while George and Melanie cautiously flirt and feed one another spoonfuls of Italian delicacies.

But when Melanie learns George is a psychic and insists on a reading, he learns things she can't bear for a near-stranger to know, and their relationship ends. It's happened to him before, and it's the main reason he wants out of the business. Finally, he flees to London, where he meets Marcus (and his brother). Journalist LeLay's there, too, enabling the threads of the story to come together in a way that seems as easy and natural as every moment, line, and note (Eastwood wrote the score, with a little help from Rachmaninoff) in this enchanting, beautifully made movie. He surely has now earned the status of one of our greatest directors.

The freaky thing for me today was the reason George goes to London. He's a Dickens fan who falls asleep listening to passages from David Copperfield, and the first thing he does when he hits town is visit Dickens' house at 48 Doughty St. Kathy and I have been there. But not knowing we'd be seeing a movie tonight about God and Dickens, this afternoon I wrote a post about Dickens and God.
By Fr. John at 9:09 PM