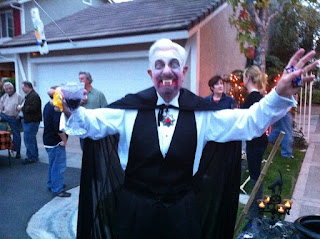 Kathy and I just discovered a street in Yorba Linda where the grownups dig Halloween even more than the kids. Don't tell anyone (it reduces the sheer intensity of the scariness) but the ghoul at left is Frank Amato, a doctor and volunteer docent at the Nixon library. I think he was meaning to flash a Nixonian V-for-victory sign, but he couldn't because he was holding a Snickers bar in one hand and a fake cocktail in the other. 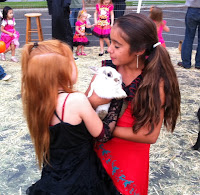 Frank and his wife live on a cul-de-sac where the residents were dressed as witches, Na'vi, outlaw bikers, and giant pumpkins, dispensing candy by the fistful. One driveway had an inflatable Christmas merry-go-round next to a caped, hooded skeleton hauling a jack o'lantern in a chariot.

It's two months early for Christmas, sure. But a week early for Halloween. On our street a block or two away, we've had fewer trick-or-treaters every year. We weren't sure if it was a national decline owing to heightened parental anxiety (apparently not), evidence of concerns among

evangelical Christians about pagan chochanals on All Hallows Eve, or maybe just our reputation as a dark, scary old people's block.

Now we think it's because of the annual spook night at our community center, which Kathy and I had never attended before. Although uncostumed, we participated on our afternoon walk. They had game booths, a pumpkin patch, and a petting zoo, where two lovely princesses were vying for sovereignty over a rabbit. At at dusk, parents led a costumed kids parade halfway around the lake to denude Dr. Amato's block of sugary combustibles. They'll be so full of Reese's and Butterfingers that they might not bother coming to our house on the real Halloween. That's okay. Leaves more for us! 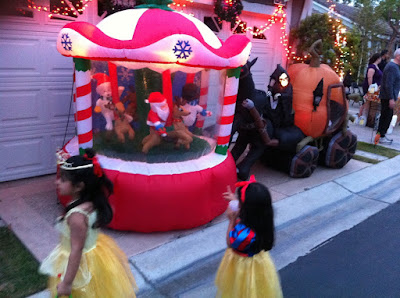