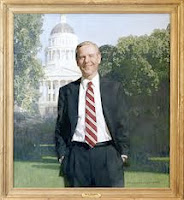 Californians just aren't tea drinkers. A new poll suggests that the governor's mansion is well out of reach for Republican Meg Whitman, while the GOP's Carly Fiorina remains eight points behind in her bid for the Senate. The LA Times:

Most of the nation has seen pronounced enthusiasm by Republican voters as the midterm elections approach. In California, however, Democrats have gained strength and GOP motivation has ebbed slightly in the last month, the poll showed. The current standings represent a reassertion of a more typical profile for the state after an election year convulsed by a foundering economy, widespread discontent about the future and record-breaking spending by Whitman, who has dropped more than $141 million of her own money into her campaign.

The Times analysis says that Gloria Allred sank Whitman by holding press conferences featuring a woman who had lied about her immigration status to get a housekeeping job with Whitman and her husband. Nobody cares much for Allred and her tactics (excepting, of course, Mr. Allred and their pets), but if such an obvious setup was enough to upset a candidate's standing with a whole bloc of voters, then she was standing near quicksand already.

The fact is that Republicans have broken their picks with California's Latinos. Some blame former Gov. Pete Wilson. I remember (this was in my Nixon library days) taking a walk with him from his office to the Beverly Wilshire Hotel and listening as he complained about the bad rap he said he'd received for supporting an anti-illegal immigrant measure, Prop. 187, when it and he were on the ballot together in 1994. It's true he won reelection. But the GOP has been in especially bad odor with Latino voters ever since.

I'd guess that Wilson, and others in his brain trust who have been advising Whitman, played a part in her shrewd if dangerous decision during the primary campaign to resist veering to the right on immigration by endorsing the Arizona law. Her more overt outreach to Latinos came next. That her housekeeper has evidently cleaned her clock so thoroughly means that if it wants to win, the GOP has a lot more hard work to do with voters who think, rightly or wrongly, they're being scapegoated.
By Fr. John at 3:58 PM