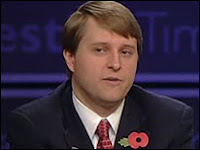 In direct mailings and broadcast advertisements bombarding Fox News viewers and listeners of WABC radio, each man accuses the others of being carpetbaggers, frauds and bogus conservatives....

Mr. Cox does claim to have created jobs as a lawyer and a business consultant, but has shied away from providing any numbers or details about those efforts, which is something his rivals, of course, ridicule.

“There’s nothing that would qualify him to run for Congress other than winning the birth lottery,” [rival candidate and former prosecutor George] Demos said.

The primary election's Tuesday. Most experts say the district leans Democratic in November.
By Fr. John at 4:24 PM