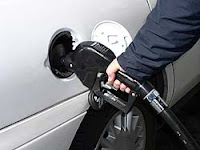 I was pumping gas this evening in Yorba Linda, reflecting on the rich day of ministry I thought I'd completed, when a woman roared up in a black two-door coupe and Bebe blouse, acknowledged the collar around my neck, and asked what I thought she should do about the instant messages her 15-year-old daughter is still sending to her father, who died last October. My pastoral response probably wasn't as good as her question. It consisted mainly of listening and evincing no eagerness to put the gas cap back, get in my car, and drive the rest of the way home. A wise Unitarian pastor told us in a seminary class that, in such a moment, there's nowhere else you need to be.

Another unscheduled encounter had occurred in mid-afternoon, when I wandered into the church office reception area to check my mailbox just as a man in paint-splattered shorts and a t-shirt walked in. We'd helped him before, and as we sat down to talk I gently urged him to be expeditious about sharing the details. It was a technical violation of the Unitarian's advice but one I sometimes rationalize in situations where a financial appeal is looming on the basis that it's in both our interests to get to the bottom line as quickly as possible.

As we talked, I remembered liking and trusting him the first time. He works as a painter for a man who does home improvement jobs. He needed $3400 to put down first and last months' rent on an apartment for him, his wife, and their six children. He opened his wallet and showed me cash and checks adding up to $3000. If someone were going to defraud you by claiming to be in extreme need, he wouldn't show you that he's already loaded. I told him he could have $400 from my pastoral care account if he promised to pay it back.

I also asked to speak with the landlord, so the man went to the parking lot to get the number from his wife. When she came into the office with three of their beaming children, including a joyous six-month-old baby named after his father, grace abounded. A father's diligence and pride, a mother's strength and poise, their kids' curiosity and cheerfulness. I wish I could show you the photos I took, but I don't want to invade their privacy. She hugged me as they left to go sign their lease. She said that she prayed to God all the time and that God always answered, one way or another, although not always when she expected or thought she most needed it.

As it turned out, our day at St. John's was all about the themes of waiting and trusting, and this resilient woman had just preached a sermon about them. And yet she couldn't possibly have known about Fr. Alexander, in whose name we were spending the day in praise and worship. 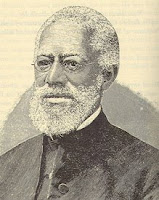 The Episcopal Church has a book of biographies and matching scripture readings that we use when we're going to celebrate Holy Eucharist on a weekday. If we were Roman Catholics, we'd call them saints, but since our view of sainthood verges on the all-inclusive, we call them notable people. This coming Friday, it's an abolitionist and Episcopal priest, Alexander Crummell. Born in 1819 in New York City, he endured one racist indignity after another on the way to ordination. He did ministry in Liberia for a while, returned to the U.S. after the Civil War, and died two years before the turn of the century. He may sometimes have wondered if things would ever get better for his people.

Our liturgical rules permitted us to transfer Fr. Alexander to today. At a noon healing service and our season-opening "Youth Euch" this evening for 45 St. John's Youth Group members and their adult leaders, I said that the experience of this dedicated pastor and activist (who had laid foundations on which others built) offered comfort in moments when

we were tempted to think that we didn't matter, that we weren't making a difference, that nothing was turning out as it should. While our lives and world will never be as we may wish them to be, if we abide in faith and hope we need have no doubt about the future or our legacy. As a verse we heard today from the apocryphal book of Sirach teaches, whatever we accomplish in God's name is sufficient:

If God's servant lives long, he will leave a name greater than a thousand, and if he goes to rest, it is enough for him.