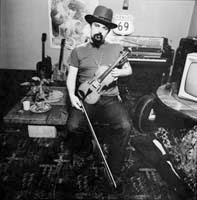 Making my way through el mes de Los Muertos thanks to a friend's gift of an anthology of Grateful Dead and Jerry Garcia CDs, I went searching for information about the late Ron "Pigpen" McKernan, blues singer and Hammond B-3 player who shines on Dead songs such as "Hard to Handle" and "Turn On Your Lovelight." About his northern California secondary school education, our cloudopedia is circumspect, taking care not to speak ill of a Dead: