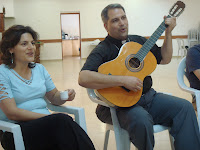 The Rev. Fuad Dagher is an Arab Christian who lives and does ministry in a predominately Arab Muslim community in northern Israel -- and if that doesn't encapsulate the dilemma and opportunities of life in the Middle East, nothing does. Fr. Fuad is the energetic rector of St. Paul's Episcopal Church in Shefa-'Amr, a town of 35,000 that's part of the five-nation Diocese of Jerusalem. Among his current projects is building a school for those with physical disabilities.

As a pilgrim in 2007, I enjoyed the hospitality of Fr. Fuad and his wife, Hana, at St. Paul's. This Sunday, he'll be our guest at St. John's in Rancho Santa Margarita, where he'll meet with St. John's pilgrims who visited Israel and the West Bank last year and another group whose members are planning a visit in January 2011 -- our hoped-for Epiphany in the land of light. In the meantime, we'll be praying for peace and justice for Fr. Fuad and all his neighbors.
By Fr. John at 5:19 PM