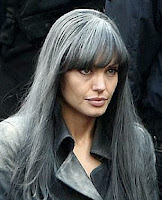 At the end of Phillip Noyce's rollicking thriller, as she staggers through the woods toward the sequel ("Salt II"?), Angelina Jolie (as CIA agent Evelyn Salt) has long since earned our respect for successfully mating MacGyver (she fashions a crude thermonuclear device from cleaning solvent and a plastic tube after masking the security camera with her underwear!) and Jason Bourne, conflicted but super-competent death machine.

But Jolie had already achieved elite action hero status as Laura Croft. In "Salt," she's even better acting her way through three delicate scenes. One pairs her with a little girl (played by Yara Shahidi) whom Salt encounters while escaping from cops and federal agents. They briefly commiserate about math homework, and then Jolie drops off her pet dog for safekeeping while changing into the getaway rig that all CIA agents evidently conceal in their apartments. She also has intense, quietly seductive moments with one U.S. agent she's trying to win over and another she hopes to trick so she can save the world.

I can't tell you if she succeeds in the story, because it would give too much away, and they might come for me. But she definitely succeeds on the screen. "Salt" also succeeds in establishing post-Soviet Russians as endlessly reliable bad guys, in this case Manchurian candidate indoctrinator Vassily Orlov (Daniel Olbrychski), who shows up in Washington one day pretending to be a defector just as Salt's leaving the office for an anniversary dinner with her arachnologist husband. Keep your eye peeled for one of his spiders in particular. It enables a deft plot twist that definitely stung me.

Jolie goes full Bourne after Orlov accuses her of being a Russian sleeper agent who's planning to kill the Russian president during a visit to Manhattan, an event which, we're invited to believe, would lead to a Brezhnevnik renaissance in Moscow. Which leads me to my one Salted beef (besides the characters ruining the transept of St. Bartholomew's Episcopal Church on Park Ave.). It's the idea, essential to the movie's totally dopey narrative, that John F. Kennedy was shot by a member of Orlov's corps. If I favored content regulation of filmmakers, my first rule would forbid anyone from asserting or implying that the 35th president was murdered by anyone except a homegrown communist traitor acting alone. The young people are confused enough about Cold War history as it is.
By Fr. John at 9:50 PM