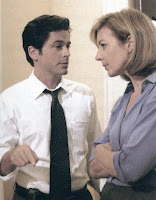 For the first time since the series ended, I'm watching NBC's "The West Wing" from beginning to end. Someone has to keep the classics alive. And who better to probe the frequent Nixon resonances? Who, period?

Here's one: In a subplot during episode #11 of the second season (2:11, the canonically minded might say), "The Leadership Breakfast," broadcast in January 2001, White House aide Sam Seaborn (Rob Lowe) proposes a space-saving efficiency: Moving the press briefing room from the West Wing to the Old Executive Office Building. Press secretary C.J. Cregg (Allison Janney) demurs, saying reporters would assume the White House was hiding things from them. "We are hiding things from them," Sam says.

In the course of the show we learn that the press room was built over a swimming pool. What series creator (and 2:11 writer) Aaron Sorkin doesn't reveal is that the pool was installed for FDR and decommissioned and drained by Nixon. The new digs were more spacious than journalists' traditional haunt, the Roosevelt Room, which couldn't contain their burgeoning arsenal of broadcast gear. In addition, Nixon wanted them further away from the Oval Office. He was hiding things from them, too.
By Fr. John at 2:25 PM