Charles Krauthammer makes a vigorous argument against the mosque and cultural center being proposed for a site near the World Trade Center. His strongest point --

Pope John Paul II ordered the Carmelite nuns to leave the convent they had established at Auschwitz. He was in no way devaluing their heartfelt mission to pray for the souls of the dead. He was teaching them a lesson in respect: This is not your place; it belongs to others. However pure your voice, better to let silence reign.

-- doesn't persuade me to affirm any government agency in the United States denying a building permit on the basis that there is an atmospheric problem with people observing a certain religion there. Nazis killed Jews expressly because they were Jews, and as a matter of fact, they had appropriated enough elements of the German church and of the energy of post-Reformation European Christian anti-Semitism that displaying a cross near a death camp could clearly be seen as objectionable.

Besides, the property in and around Auschwitz isn't governed by the Bill of Rights of the U.S. Constitution. Osama bin Laden murdered people on Sept. 11 not because they were Christians, Jews, and Muslims, which they happened to be, but because they were mostly Americans. He wanted to hurt America, and we hurt America more by compromising a core First Amendment principle. 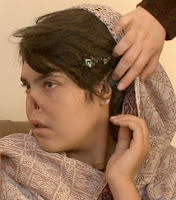 And yet there's another uniquely western principle that may well be at stake in this debate. I've seen stories about the mosque planners' questionable views on the root causes of Sept. 11. I've read and heard wild speculation about whether this or any other mosque will spawn terrorists. But I haven't yet read of anyone asking if girls and young women in the lower Manhattan cultural center will be treated exactly the same as the males -- empowered, encouraged, and educated in the same way and taught that Muslim women in the United States are guaranteed the same rights and opportunities as men. Call it the Bibi Aisha rule. Give the wrong answer, and maybe you get your building permit but lose your tax-exempt status.
By Fr. John at 3:27 PM