When He Locks Into That Backbeat 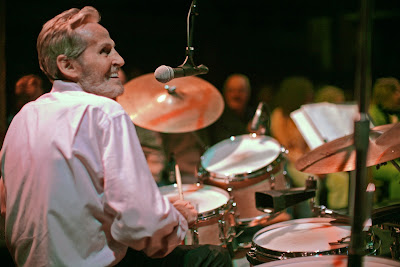 Along with buddy and blues hound Gary Baker, who helped us lay President and Mrs. Nixon to rest at the Nixon Library lo! these many years ago, your correspondent is heading to Woodstock (40 years after the great event; better late than never) to see the Levon Helm Band's Midnight Ramble on Saturday night, in the legendary Band vocalist and drummer's barn. They say you never know who'll drop by. Texas songwriter Robert Earl Keen did and wrote a song about it, "The Man Behind the Drums," on his new album, "The Rose Hotel." This account of the Oct. 10 Ramble gives you the flavor:


Intimate? It really was like standing around in somebody’s living room and watching a world-class band crank out some of their favorite songs. For more than two hours, I stood no more than 15 feet away from Levon Helm as he churned through some of the funkiest backbeats I’ve ever heard. I was begoggled.


Helm wasn’t singing. He’s still on doctor-ordered vocal rest after a successful throat operation in August, but that certainly hasn’t slowed him down any behind the drum kit.

Larry Campbell – Dylan’s longtime guitarist – led the band, and what a band it was. A fabulous four-piece horn section, including the great Howard Johnson on baritone sax and tuba. Gruff-voiced Brian Mitchell behind the grand piano. Teresa Williams and Amy Helm adding not only plenty of angelic harmonies, but also some serious sass and sizzle at the microphone. And, oh yeah, there was Jim Weider – the guitarist in the Band’s post-Robbie Robertson days – firing up guitar licks that seemed to come flying in from some fifth dimension.


The songlist was sublime. There were plenty of Band classics – from the opening “The Shape I’m In” to the show-closing “The Weight,” with stops along the way at “Long Black Veil,” “Chest Fever” (with a crazy-good Campbell-Weider guitar duel) and a towering rendition of “It Makes No Difference” with Williams and Amy Helm pouring their hearts out.


And if you never paid serious attention to the latter-day incarnation of the Band, the fiery Campbell-Weider duet on “Remedy,” would definitely find you re-thinking your position.
There was a nod to the Dead with “Tennessee Jed” (also on Helm’s great new album, “Electric Dirt”) and a sweet, folksy version of “Attics of My Life.” There were blues, honky tonkers, a country waltz, soul (Amy Helm’s reading of “Everybody Loves a Winner” was one of the highlights of the night) and a heaping helping of strutting New Orleans funk, including “Deep Ellum Blues” (with Helm on mandolin and some wild hoochie coochie dancing) and “All On a Mardi Gras Day" (with the horn section parading through the audience).