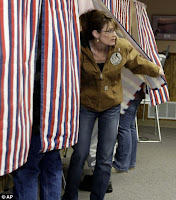 If you're a moderate Republican like I am (given the size of my readership, you're probably not even reading this, which really does make it all about me), you probably had a wide range of reactions to Sarah Palin's successful effort to drive a liberal Republican, Dede Scozzafava, out of the race for the 23rd congressional district in New York.

We should be clear about her candidacy, first of all, which was wrought by party bosses, not voters. Is she more liberal on economic issues than one might prefer? Probably. And yet are the forces of social-issue purity -- pro-life, anti-gay rights -- expected to be the key to a win tomorrow by Palin's choice, Conservative Party carpetbagger Doug Hoffman? Unquestionably. Is there room in the Republican Party for someone with her views? Only if it wants to be a national factor again (short of a national or international disaster which, once laid at President Obama's feet, would be automatically advantageous for the GOP regardless of whether it was tilting to the right or the center).

So how does one voter register a protest against the rogue Alaskan and her minions and really make a difference?

I briefly considered reregistering as a Democrat or an independent, but I felt President Nixon's displeasure, so I swiftly gave up that notion.

I then considered contributing to Democrat Bill Owens' campaign in the New York 23rd. After all, if he wins the previoously safe Republican seat, it would discredit Palin and, one might think, hasten the party's agonized reappraisal of its purposes and aims. But I don't think there's any stopping her drive for the 2012 nomination. Indeed the moderate Republican's smart move would be to throw his support behind Hoffman, increasing her momentum toward the '12 precipice. Only when she or a candidate with her views is defeated by an historic margin will the GOP understand the futility of its seemingly endless quest for the new Reagan.

Anyway, I couldn't bring myself to send Owen the $100. Instead, I joined the Ripon Society, a centrist GOP think tank that promotes fiscal sanity and social tolerance -- you know, like Abraham Lincoln and Teddy Roosevelt. That's showing 'em, huh?
By Fr. John at 8:15 AM

Well it showed me, any way. I will do the same having staggered painfully through the same intellectual swamp these past months.
Thanks you, Father (as this was *very* pastoral)!