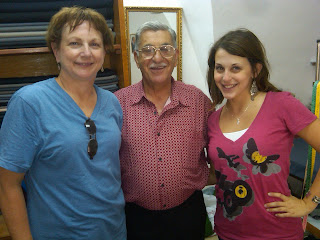 Sami Barsom, recently honored by his Patriarch for 50 years of service as a lay leader in Jerusalem's Syriac Orthodox community, has a small tailor shop in the Armenian Quarter of the Old City. On my first pilgrimage two years ago, I found Sami by chance and bought a beautiful white and gold stole he'd made. I've used it in a half dozen weddings and gotten water on it during 30 baptisms. Yesterday I wanted to introduce him to my elder daughter Valerie, but, well, I couldn't find him. Using my BlackBerry, we Googled "Sami, tailor, Jerusalem," and found this link -- the first one that popped up! -- but no address.

We finally made our way to the Syriac Patriarchate, where a helpful man showed us through a maze of back streets to Sami, who by then had closed for the evening. Kathy, Valerie, and I tried again today. He received us warmly and showed us the notes for his memoirs, including photos of him with Yasser Arafat and Israeli leaders alike.

Sami's so-called Oriental orthodox church, which has about 2.2 million adherents worldwide, broke from Roman and Greek orthodox Christians in the fifth century over Christology, or the nature of Christ. If my friend and church history professor Charlie Frazee, one of the world's leading experts on these matters, were here, I'd have him explain exactly what happened at the Council of Chalcedon, but since he isn't, here's Wikipedia's take:

There'll be a quiz tomorrow. In the meantime, if you're in Jerusalem and want to talk theology with Sami (or exquisite stoles and suits), he's at No. 26 St. Mark's Street. There's a Syriac Orthodox church in Orange, California called St. Mary's.
By Fr. John at 6:37 AM