Knock Knock. Who's There? Maybe Jesus 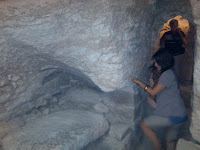 Beneath the convent and guest house of the Religious Sisters of Nazareth, where our St. John's pilgrim band spent three days, is an excavation that some believe has uncovered a first-century Nazareth street as well as a doorway to a cave dwelling that could have belonged to the Holy Family themselves or, if not, their relatives or neighbors. Note that "some believe" and that "could have." In the Holy Land, separating the certain, possible, largely traditional, and purely conjectural is hard, sometimes unwelcome work. Some skeptics argue, for instance, that Nazareth didn't exist, or barely existed, in Jesus's time. It's not mentioned in the Hebrew testament nor in any secular histories of the period. Our guide, Canon Iyad Qumri, believes that only 400-500 people lived in the town in the first century -- which, if true, increases the likelihood that Jesus, as a child or young man, passed through this doorway, coming home or making a visit. 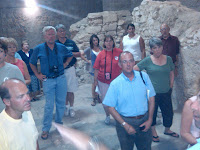 Guesswork and wishful thinking notwithstanding, there's some evidence that our modest pilgrim guest house was built on one of the most sacred places in Christian history. Accounts from the fourth and seventh centuries say there were two churches in Nazareth in the early Christian era, one built where the angel Gabriel appeared to Mary, the other, says the later source, "where the LORD was fed" -- perhaps meaning where he was brought up. The first site is thought to be the original church built on the site of the modern Basilica of the Annunciation, which also purports to enclose Mary and Joseph's home. But what if, as experts suggest, the second of the two early churches was actually built on the future site of us pilgrims' home away from home? Iyad told us that the sisters' convent used to be a church. After the Muslim 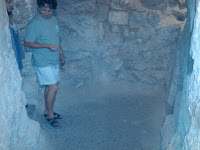 s conquered Palestine in the seventh century, they often razed churches and built mosques in their place. But they left this site alone and built their mosque nearby, perhaps, Iyad said, because the place was associated with Mary, whom Muslims hold in great esteem.

Too many "ifs" and "perhapses" and the people of faith may lose patience. Unfortunately, as with much in the realm of faith, there are few easy answers about the details of Jesus's early life. As Iyad repeatedly stressed, if it's ambiguous, argued over, or flatly contradictory, that means it's the Holy Land. Besides, if it's just possible that Jesus lived or visited there, and you're standing there, too -- believe me, it's way good enough.
By Fr. John at 11:35 AM