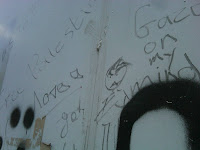 We St. John's pilgrims ended up visiting Bethlelem a day earlier than planned because Canon Iyad Qumri got a hint about the massive security effort being mounted for Fatah's first-ever party conference inside the West Bank. From the "Economist," a vaguely optimistic conference postmortem:

National elections are set for January 2010. The new Fatah leadership will still face a strong challenge from Hamas, but even before the conference in Bethlehem Fatah had been enjoying a surge in popular support in the West Bank. This was due partly to the improved economic situation and also to the increased calm on the streets, attributed to the intensive American training of the PA’s security forces. Israel’s massive onslaught on Hamas-controlled Gaza earlier this year also seems to have validated Mr Abbas’s more moderate approach. “I like Fatah more now,” said a young man who was selling roast chicken in the market in front of the Nativity church in Bethlehem. “There are a lot of scary things going on in Gaza. Hamas is crazy. Palestine is Fatahland.”