Digging Down To The Top Of The Hill 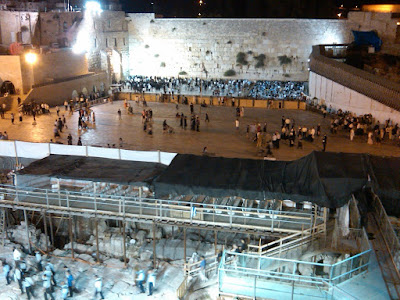 As seven of us pilgrims took Mike for a walk through the Old City tonight, we saw this magnificent view while climbing the steps from the Western Wall to the Jewish Quarter. At 9 p.m., hundreds of Jews were still at prayer, as though burrowing through, as one pilgrim put it, to the Temple Mount, where Muslims worship at the Al-Aqsa mosque and the Dome of the Rock. In the foreground is a group touring Israeli excavations that have uncovered extraordinary finds from the pre-Christian, Roman, and Byzantine periods.

Archaeologists would like nothing more than to burrow under the Temple Mount to find the seemingly inevitable substantial remains of the Second Temple, of which the Western Wall is part. But doing so would disrupt or destroy Islam's third holiest site and risk the ire of hundreds of millions of Muslims -- a small fraction of whom maintain that the Second Temple never existed.

Much of the tension in Jerusalem and the Middle East results from such competing primacy claims. Today our St John's pilgrims even heard an indigenous peoples argument being used to undermine Jews' insistence that their temple preceded Islam's installations. Canaanites, forebears of Palestinians, Palestinian artist and anthropologist Ali Qleibo reminded us, worshiped in Jerusalem long before Jews. He also suggested that the animal sacrifice rituals still being conducted by Christians in the West Bank town of Taybeh prove that Palestinians were killing animals during worship long before the Jews were -- a dubious distinction, one would think, and yet a useful one when claiming that in the great Jerusalem derby, Islam really didn't come in third behind Judaism and Christianity. Perhaps Dr. Qleibo would endorse those Temple Mount excavations so we can learn more.

As for us Christians, the only Abrahamic branch without a dogma in the hunt when it comes to the Temple Mount, we are usually satisfied to take the "place" position.
By Fr. John at 12:14 PM