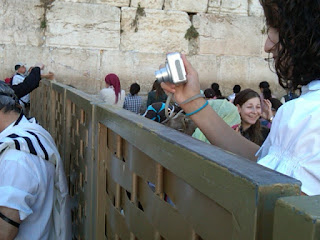 While Orthodox Jews and religiously conservative Muslims have their differences, they regretfully concur on the status of women. An odd moment for Christian pilgrims visiting the Western Wall is when females are relegated to a small area at the south end while men prowl a vast terrain that includes a library and study center that runs along the north. One young woman yesterday cheerfully undermined the status quo with her camera. Posting on Facebook, my Andover classmate and fellow Episcopalian Carter Mears described his own pilgrim band's response:

No va mas bien on the Temple Mount. When we visited Islam's third holiest site yesterday morning, the experience of one of our pilgrims was marred by an official who castigated her for her perfectly modest neckline. When I asked my thoughtful and open-minded daughter, 24, what she had thought of the learned, genial anthropologist who guided us around the Al-Aqsa mosque and Dome of the Rock, she said, "I pretty much tuned him out after he went on and on about all the scantily-clad young women."
By Fr. John at 7:27 PM