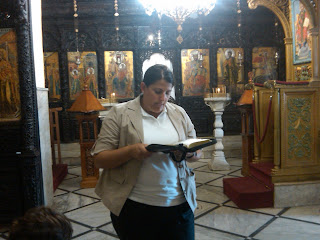 While Nazareth has 65,000 people today, Joseph and Mary had perhaps 300 neighbors, most living in caves in the hillsides. Beneath the guest house of the Religious Sisters of Nazareth, where our St. John's pilgrims have arrived for three nights, excavations have revealed a section of first-century street and a doorway that the young Jesus may well have walked through while visiting neighbors, friends, or cousins.

Yesterday we visited three churches, including the magnificent Roman Catholic Basilica of the Annunciation. The plainest was built to commemorate the quiet heroism of the man who went through with his marriage to a pregnant girl so she wouldn't be exposed to scorn or worse. We are used to seeing Jesus cradled in his mother's arms, but in the Greek Orthodox Church of the "Announciation" a ceiling mural's depiction is equally natural: A toddler riding on his legal father's strong shoulders during the family's flight to Egypt.

The small church, built over the spring where Mary is said to have gone for water when she had her world-changing encounter with the angel Gabriel, is filled with icons that glow in the light of candles and multiple hanging fixtures. As pilgrim Mary read Luke's account of the fateful conversation in which a Nazareth teenager learned she would be what the Greeks call God-bearer, her voice cracked when she got to the words of her courageous namesake: "Let it be with me according to your word."
Sent from my Verizon Wireless BlackBerry