Own Your Feelings, Mr. President 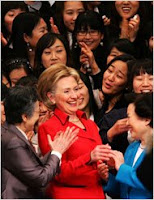 In China and throughout Asia on the 37th anniversary of 37's historic visit to Beijing, the Secretary of State is getting rave reviews. In the end, that could be bad for her. Early this morning somewhere in the White House or Old Executive Office Building, someone read this in the New York Times and muttered, "Well isn't that special! We're stuck back here saving Joe the Plumber's mortgage, and she's turning the world on with her smile":

Mrs. Clinton is exploiting both her megawatt celebrity and her training during the presidential campaign. On Friday, nearly 3,000 female students packed an auditorium at Ewha Womans University in Seoul to hear Mrs. Clinton deliver a speech that ranged from North Korea’s nuclear threat to the challenge women face in balancing work and family.

A standing-room-only crowd at the University of Tokyo listened to Mrs. Clinton discuss how the United States should rebuild its ties to the Muslim world. Toward the end, a nervous young woman, who said she played on a baseball team, asked Mrs. Clinton how to become as strong as she was.

“Well, I played a lot of baseball, and I played with a lot of boys,” she replied, to peals of laughter.

Mrs. Clinton said she was skeptical that these appearances alone would lead to changes in the policies of foreign governments. But by connecting with people on a personal level, she said, she believes she can help mold public opinion, which, in turn, can influence governments.

“President Obama has an extraordinary capacity to do that because of the really positive feelings that he personally engenders,” she said. “To a lesser degree, I have some of the same capacity.”

The Times also notes, "Henry Kissinger, this isn't," perhaps failing to grasp the irony. It wasn't lost on RN when the media fawned over HAK while reviling his superior. I wonder how Obama will react to having unleashed a superstar of his own. Clinton's purported political perfect pitch evaded her when she said that she shared the President's charismatic gifts, albeit "to a lesser degree." Good thing she said that last bit. To extend her own sports metaphor, while she "played with a lot of boys," she definitely doesn't want to call out Obama for a game of one on one.
By Fr. John at 9:43 AM

Yes, secretary Clinton is quite capable and seems to enjoy her job.
And indeed, it reminds us of superstar Henry doing all that hard work. And the president encouraging him, letting him fly in airforce one and writing him in a note: "Where would the country be without you?"
Some journalists think that after all their achievements their relation cooled down, but Monica Crowly writes that even after twenty years they had several telephone calls.