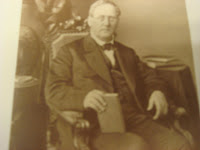 From 1837 until his death in 1871, my seminary-trained great-great-grandfather, Samuel Harvey Taylor, was principal of Phillips Academy, a boys prep school in Andover, Massachusetts. In later years, it had a headmaster; these days, it has a head of school, Barbara Landis Chase. These successors of Dr. Taylor are lucky that Andover, which Humphrey Bogart, Jack Lemmon, and the Presidents Bush all attended, survived him. While a lot about secondary education changed between the Presidential administrations of Gens. Andrew Jackson and Ulysses S. Grant, Samuel Harvey Taylor did not. He discouraged the study and even reading of literary fiction, for instance, preferring a curriculum focused on Latin and Greek and maybe a little mathematics.

He died of a massive stroke one Sunday on the chapel steps. His massive gravestone says that students and faculty "made great lamentations" as a result. His son and grandson taught at or attended Andover, but my late father, Harvey Hileman Taylor, could not. He always dreamed that John Harvey Taylor would attend, and even after they had divorced, my mother struggled to make it possible. I probably wouldn't have gotten in without the family connection (I lived for three years in the shadow of Taylor Hall). Like Flounder in "Animal House," they had to take me. An indication of the quality of my academic work is that when I wrote a paper for Dr. Frederick Allis's History of Andover class about my own relative Dr. Taylor, I could only manage a C.

Ironic, then, that I should begin full-time work this week as the vicar of an Episcopal school in south Orange County. The blessing is that my work is primarily pastoral. We have a visionary headmaster with a third of a century's experience in independent and Episcopal education, Jim Lusby, who skillfully runs St. John's. While Mr. Lusby considers values education as important as academic success, we can be grateful he doesn't adhere to Dr. Taylor's specific doctrines, described by Professor Edward A. Park in an address contained in a memorial volume which was published by the principal's last class in 1871:

[Dr. Taylor] believed that one of the dangers to which this democratic land lies exposed is a disrespect for law: he therefore believed that he was performing an act of kindness to his pupils when he was accustoming them to obey. He believed that, if they would yield their wills to the authority of a school, they would more easily yield their individual interests to the civil government, and would be more apt to prostrate themselves before the Infinite Ruler and Sovereign.

Less so by the time I arrived in 1969, which turned out to be the last year of coats and ties and mandatory chapel. That same autumn, students successfully pressured the administration to cancel classes for a day so we could learn more about the National Liberation Front in Vietnam. The following year, "Time" magazine wrote about students smoking dope in the on-campus bird sanctuary and having sex with girls they had smuggled into the dorms. These were the last years of headmaster John Mason Kemper (who colorfully describes Uncle Sam's reign of fear here) and the first years of Theodore Sizer, a leading independent educator. Especially after it became coeducational in the fall of 1973, the year I was graduated, Dr. Taylor probably wouldn't have recognized the place, and yet it turned out to be a blessed experience for his great-great-grandson. I discovered my love of my parents' vocation of journalism and began to learn to live on my own. Thank you, Uncle Sam!
By Fr. John at 3:30 PM

LOL -- caught that. Thanks!