I'd Rather Be A Ball Park Wiener 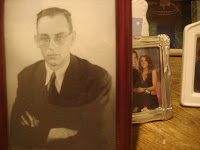 I posted this at The New Nixon on July 3, 2008. Since it was recently exhumed by my cousin and fellow Episcopalian Caroline Taylor Webb, I thought I'd re-post it here.

One of our tiny family's big stories is that my late father, Harvey Hileman Taylor (shown above), named the Ball Park Frank. Enfolded today and yesterday in my wife Kathy's much larger family of voluble New Yorkers as they bade farewell to her dad, Jim Hannigan, who died Monday at 83, I tossed my tale on the griddle again to see if it would plump up. It's the sort of story you tell during wakes and at long, leisurely dinners after funerals. To paraphrase Dr. Kissinger, the exploits of picturesque loved ones don't necessarily have to have the additional advantage of being true.

The story goes that my dad, who in the 1940s and '50s was a music critic and columnist and eventually the entertainment editor of the Detroit Times, was hired by a local ad firm during one of that Big Labor city's legendary newspaper strikes. Harvey Taylor wasn't a company man. He was a drink martinis with a twist at the Detroit Press Club until last call man. You would not have found him at his desk at 9:30 writing ad copy nor in the building much before after lunch. Nor would he have been great in a meeting, since, although charming and funny, he had a debilitating stutter.

And yet my newspapering mother, Jean, has always insisted that -- as a conference room discussion swirled ineffectually about what to name a new line of hot dogs being launched by one of the firm's clients -- my father piped up, "It c-c-couldn't p-p-possibly b-b-be more o-o-obvious. If you're naming a hot d-d-dog, you should name it the B-B-Ball P-P-Park F-F-Frank."

There's also the one about my father standing in the threshold of the reading room of the Detroit Athletic Club after lunch and startling members dozing in red patent leather chairs by calling out, "Gentlemen, K-K-Khartoum has fallen."

Only tonight did it occur to me that this is just the kind of project for which President Nixon invented the Internet.

A Detroit, MI meat-packing company called Hygrade Food Products won a competition in 1959 to be the exclusive supplier of hot dogs to the Detroit Tigers stadium. It was from this venue that Ball Park Franks gained notoriety and became a mainstay in American pop-culture.

Whoever dubbed the dog, it happened in Motown, and for the greater glory of old Briggs Field, the House Al Kaline Built.

But was there a newspaper strike in Detroit in 1959? Hot dog: "Time" helpfully reproduces this 1964 article:

Until 1955, Detroit had never had a newspaper strike. Since then, the city's papers have been struck so regularly that by 1959 newspaper readers were dryly referring to "Detroit's Fourth Annual Newspaper Strike." That year, in fact, there were two walkouts—after which Hearst's morning Times, weakened by the high cost of labor warfare, sold out to the evening News, and was discontinued.

So maybe my favorite shaggy hot dog story is at least in the ballpark. Our great American wiener, by the way, is now cooked up by Sara Lee.

Calling some of those strikes (and thus maybe sending my dad into the hot dog-naming business) was his friend and my beloved late godfather, Louis Cook, a critic and columnist who served for many years as president of Detroit's chapter of the Newspaper Guild, the union representing reporters and photographers. Ironically enough, as "Time" noted, the 1959 walkouts spelled the end of my dad's paper. He worked at my mother's and Louis's paper, the Detroit Free Press, until his death in 1975.

I didn't know him especially well -- my parents separated when I was two -- but I'll always remember him as the gentlest of souls. And yet he evidently could be a tough critic. In 1949, the Detroit Symphony Orchestra was going through a rough patch creatively. Again, "Time" (all blessings to its on-line archivist for preserving all this Great Lakes arcana) reported,

Wrote the Detroit Times after a concert last week: "A morass of spotty mediocrity . . . the low point of the season."...Seven [musicians] called Times Critic Harvey Taylor and told him, he reported, that they had signed a paper under virtual coercion demanding that Taylor himself be barred from all future concerts. The Times front-paged the whole story.

There's also a family story about DSO members getting harmonious revenge. Someone persuaded my father to perform a piano recital as orchestra members sat in the audience and then collaborated on a review published the next day that was none too flattering. I'll research that one at the next family funeral, I guess -- and may that sad day be far, far away.
By Fr. John at 6:48 PM