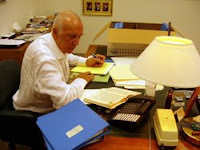 Ann Hornady gets it wrong in the Washington Post:

In "Frost/Nixon," Frank Langella didn't really look or sound like Richard Nixon. If he had, his performance as the disgraced former president would have had little more artistic heft than an old Rich Little bit on "The Tonight Show." Instead, he developed an outsize, almost Shakespearean physical and vocal persona, giving Nixon a brooding, bearlike physicality and a growling baritone completely at odds with Nixon's actual cadences. The reason it succeeds is that it's a full characterization, grounded in Langella's own preparation for the role and defined by every single choice he makes, from where he focuses his eyes to the way he walks across a room.

Perhaps Hornady knew President Nixon and had the opportunity to watch him interact with family members, friends, and aides. I doubt it, because if she had, I believe she would have been unnerved by how effectively, and recognizably, Langella (shown studying RN's own Frost interview notes in my old Nixon Foundation office) portrayed him. My guess is that Hornady only knows the public Nixon, from his speeches and press conferences.

Those who experienced the public and private man, as I and many others did, couldn't help but discern the difference between the two which I've always attributed to his introverted temperament. The public Nixon was studied and sometimes unsure, the private Nixon avuncular, attentive, inquisitive, dryly funny, lightly self-deprecating, almost exactly like Langella's performance. As Langella himself has made clear, he recognized something of his own nature and personal history in the President, hence the synergy. Mr. Nixon's voice deepened in his seventies, so Langella even gets the baritone growl right. As for the actor's greater size, it helped him communicate the gravitas Nixon projected from five-foot-ten. When he entered a room, people noticed, because of who he was, and because he had wielded great power.
By Fr. John at 2:50 PM