On Thursday, as the sun set over Jerusalem, we pilgrims gathered on the roof of the Holy Land Hotel for an abbreviated service of evening prayer. "O gracious light," we said, "pure brightness of the everliving Father in heaven...Now as we come to the setting of the sun, and our eyes behold the vesper light, we sing your praises..."

But this was Jerusalem, so we weren't praying alone. No one ever is. When the time came for the Lord's Prayer, our voices were blending with t

hose of muezzin calling Muslims to their sunset prayer (7:55 p.m. in Jerusalem, or about ten minutes after our service had begun). I could distinguish at least two chants, and there may have been three. Our hotel in east Jerusalem had three minarets within sight. So we joined hands and joined our voices to those of the muezzin and chanted the Our Father using one of the settings from the Episcopal hymnal.

You could say the moment was holy polyphonic. We weren't arguing or trying to drown out theological competitors. There's more than enough of that in Jerusalem without our adding to the mayhem. Something similar happens every day during scheduled worship in the Church of the Holy Sepulcher, where we got a behind-the-scenes tour on Friday afternoon from Rev. Fergus Clarke, one of the Franciscan priests who work with five other denominations -- Greek, Armenian and Syriac Orthodox, Coptic, and Ethi 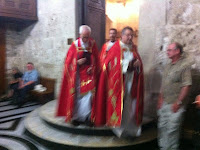 opian -- to operate and care for Christianity's holiest place. Fergus reminded us that his is the only church in the world where denominations worship simultaneously in different languages -- for instance Coptics and Roman (or Latin) Catholics at opposite ends of Christ's tomb, within 20 feet of each other.

I've heard it, and it's beautiful. While agreeing by and large on just one thing -- that in the tomb they preserve and adore, our God in Christ destroyed death and saved the world -- these Christians all worship differently, and so have we on our 10-day pilgrimage.

The Rev. Canon Michael Bamberger (shown here with pilgrims Brenna and Steven Hayden) and I took turns celebrating Holy Eucharist -- Mike on Saturday morning in the ruins of a Crusader church at Emmaus Nicopolis, I a few days earlier on a stone altar overlooking the Sea of Galilee. But when it came to our non-Euc 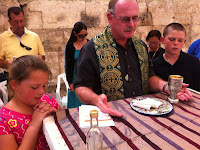 haristic services, we mixed it up considerably, taking turns organizing our pilgrim worship.

One evening Fr. Mike borrowed a moving Compline, or close-of-day, liturgy from our Diocese of Los Angeles colleague Canon Randy Kimler. The next night, pilgrim Christian Kassoff, co-leader of an emergent Christian community in Huntington Beach called Thom's, invited pilgrims to reflect about their first few days in Jerusalem. Christian and his son, Damian, took turns anointing them at the end of the service. I did the honors with the holy oil after the Rev. Lisa Rotchford, knee-deep in the Jordan River, presided at a reaffirmation of our baptismal vows (that's pilgrim E 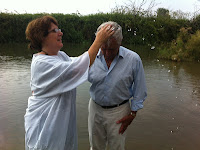 It was back to the rooftop when we gathered in Nazareth one evening by the light shining from the cupola of the nearby Basilica of the Annunciation. Another Thom's minister -- Christian's wife and Damian's mother, Shannon -- led us in yoga and guided meditation. During one of my turns, I stretched liturgical propriety even further than yoga instructor Shannon stretched our pilgrim hamstrings when I offered some doggerel to be sung to the tune of "Pray For The Peace Of Jerusalem," which our Galilean friend the Rev. Fuad Dagher taught us at St. John's back in 2010. I hoped to illustrate the pilgrim virtues of patience, flexibility, tolerance, and unity:

When we set out for Tel Aviv

Muslims and Jews, Christian orthodox
For all kinds, Jerusalem's the place
We walk the ancient streets of this town
Amazed by diversity of faith

In Bethlehem we reached and touched
The rough stone that sheltered the Christ
His love proclaims such unity
That mocks all our conflict and strife.

We pilgrims also shared perhaps 25 scriptural readings connected to the sites we visited and 50 prayers and blessings, almost all in the name of our Lord Jesus Christ. I remember just two exceptions. After we'd heard a talk by a religious Jew and peace activist who elected to stay for our closing prayer, Fr. 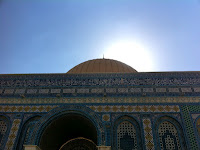 Mike left out the reference to Christ. Saying grace over our Saturday lunch at a shawarma restaurant on Salah al-Din in east Jerusalem, where we were surrounded by pious Muslims, I prayed in the name of the Creator, not to deny Christ but avoid disappointing him by excluding any of God's beloved non-Christian creatures who may have been listening.
By Fr. John at 6:28 AM