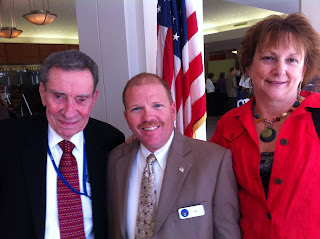 That's Kathy O'Connor, President Nixon's last chief of staff, with his brother Edward and our Nixon foundation friend Ric Leczel this morning after ceremonies marking the opening of the new Watergate gallery at the Nixon library.

Ed was stooping to stay in the frame. The Watergate opening is standing tall as a national story. Follow the links to the LA Times (Chris Goffard's first take), Orange County Register, Associated Press, USA Today, Washington Post, and ABC News -- where, if the story makes the evening news, it will be introduced or reported by former Nixon aide Diane Sawyer. The AP's Michael Blood favored me with a quotation as follows:

John Taylor, who worked for Nixon after he left the White House and helped design the original exhibit, said it was difficult for those who revere Nixon to deal with Watergate. He said the content in the new exhibit made him uncomfortable but with the passage of time, "you can hear the truth, you can accept the truth and you can learn from the truth."

"In the next 50 years America is going to answer the question, what is the sentence that goes with Mr. Nixon?" Taylor said. "Is it, he went to China, or that he quit? For that to be a fair dialogue, this day had to happen."

Kathy and I went to work trying to get the private Nixon library into the federal system in the mid-1990s. Nixon family members desiring a richer settlement from a lawsuit torpedoed our first effort in 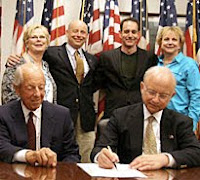 That still left the matter of our polemical 1990 Watergate gallery, which had outlived its usefulness, as often happens at first-generation presidential museums that have to grapple with unpleasant or controversial events. Today's unveiling of a stunningly presented, federally anointed replacement was a tribute to Cold War historian and exhibit curator Tim Naftali as well as to two archivists of the U.S., Allen Weinstein (shown signing the handover papers in 2007) and David Ferriero. Ferriero in particular withstood considerable pressure from the Nixon-Bob Haldeman aides who took control of Nixon's foundation as Naftali was conducting his painstaking work.

At today's ceremony, attended by 200 federal library staffers and loyal volunteers (that's Kathy with docents Connie Mesko and Gloria Norton), both Ferriero and his deputy, Sharon Fawcett, amply praised Naftali's professionalism and integrity. Kathy and I were especially pleased to hear that, having gotten him into these often treacherous straits in the first place. Today's mountaintop moment after two difficult years had Naftali waxing prophetic in his eloquent prepared rem

arks, praising the durability of the U.S. system when one of the three branches abuses its power and suggesting that all presidential libraries should exhibit curatorial as well as archival integrity and openness.

While the Naftali doctrine should be given close attention by Ferriero and his colleagues whenever principles of good practice at presidential libraries are discussed, the structural difficulty with his approach is that a president's rich friends won't contribute millions to see a warts-and-all museum or indeed wart one. Read more about libraries and money here. Until now, NARA has put up wit 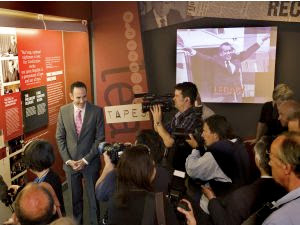 h a generation or two of museum hagiography in exchange for warehouses for storing millions of pages of memos and letters as well as photos, gifts, and other artifacts. Now that the vital records of an eight-year administration can be stored on a few MacBooks, will presidential libraries persist? Tune in in two years or six. If there is an Obama library and museum, you can bet that Roger Ailes and Sean Hannity will be howling for curatorial integrity and openness as strenuously as any Nixon critic ever did.

While I have a pretty good idea what's in the Watergate gallery thanks to the background at nixonlibrary.gov, I look forward to spending a quiet afternoon with the massive interactive exhibit, walking that long, hard road with 37. I'll be especially interested to learn who won the argument between Naftali and Nixon's White House men over whether the museum-going, taxpaying public has been permitted to hear substantial excerpts from oral history interviews with Naftali in which Dwight Chapin, Fred Malek, and others discuss dirty tricks, counting Jews in the Bureau of Labor Statistics, and other discouraging moments from an era when a peace-making, partisan warrior of president, caught in the maelstrom of a war he didn't start, mediated between his dreams and demons.

In any event, it was high time for the Nixon library, now in its 21st year, to grow up and accept that the judgment of history, no matter how it comes out for Nixon, lies beyond the reach of advocacy by family, friends, consultants, and especially those whose own reputations hang in the balance alongside the president they served, often honorably but sometimes, as this new exhibit shows, not.
Above photo, showing Nixon library director Tim Naftali briefing the media on the Watergate gallery, is by Jebb Harris of the Orange County Register.
By Fr. John at 2:58 PM