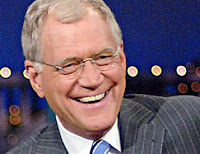 Print journalism may be dying and the New York Times struggling, but six reporters were available today to assemble an article about David Letterman and his alleged blackmailer -- and a mean little article it is. The obvious, perennial cheap shot, in which the article revels, is hypocrisy:


David Letterman, who built his career skewering philandering politicians and show business “weasels” and “boneheads,” finds himself in the middle of his own celebrity scandal...


[T]here is the open question about how fans will receive Mr. Letterman, who has long used his stance as a sarcastic comic commentator to ridicule the behavior of politicians and celebrities. “Today, The L.A. Times accused Arnold Schwarzenegger of groping six women,” he once said in a monologue. “I’m telling you, this guy is presidential material.”

And yet the Times discloses that none of Letterman's affairs occurred after he was married, no one has ever accused him of sexual harassment, and his production company, Worldwide Pants, has no policy prohibiting such relationships. Based on what we know now, Letterman has done nothing wrong, unless the six reporters are opposed to premarital sex, revealing a heretofore undiscerned streak of sexual Puritanism at the Times.

As for the poor victims of Letterman's hypocritical rants, the LA Times had accused Schwarzenegger of inappropriate and possibly illegal harassment, which made him fair game for a monologue whether or not the comedian had a girlfriend. My guess is that those whom Letterman called weasels and boneheads weren't single people in consensual relationships, either. They had probably been caught committing adultery, abusing the public purse, abusing or harassing people, or covering up. In contrast, Letterman told the public exactly what had happened. Too bad it didn't occur to one of the six reporters to find an expert willing to reflect on how better off some of the weasels and boneheads might've been if they'd handled their crises as forthrightly as Letterman.

The Times also grossly misconstrued Letterman calling himself "terrible" and "creepy." Again, did all six miss the sarcasm? In his remarkable statement last night, Letterman says the alleged blackmailer threatened to expose him to public humiliation. Late in the segment, with a dramatic flourish, he reveals that the sum total of the accusation was that he'd had consensual sex with colleagues. Memo to the Times ombudsman: Letterman was saying that he's not terrible and creepy and also, I felt, that he profoundly resented being told otherwise by a towering weasel and bonehead.
By Fr. John at 7:54 PM