Obama Is The New Kissinger 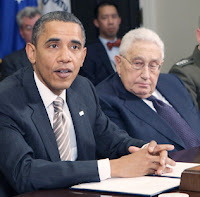 Jacob Heilbrunn, writing at the National Interest, published by the former Nixon Center:

Can anyone doubt that the blind lawyer and dissident Chen Guangcheng, who says that he feels a "little" lied to by American embassy officials in Beijing, was, more or less, hustled out and dumped into a hospital before he could further disrupt Chinese-American relations, especially with high-level meetings coming up between Hillary Clinton, Timothy Geithner and their Chinese counterparts? If any episode crystallizes the ruthlessness of President Obama, it should be this one. Even as the GOP tries to depict him as an impotent president, he is acting more ruthlessly and decisively than almost any American president in recent memory, including George W. Bush.

Obama gives off every sign of taking coldly antiseptic positions in foreign affairs. Again and again, Obama has dismissed the notion that he should get involved in the internal affairs of other countries. The Arab Spring? He viewed it with caution. Libya? He tried to lead from behind. Syria? He wants nothing to do with it.