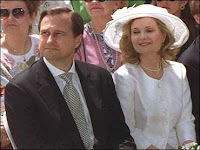 Edward Cox is always looking for a way to make a name for himself, and get more into the political game. That Cox is a centrist, and very bright for the most part makes this donation to Scott Walker all the more sad as it only underscores Cox’s desire to be playing in the arena regardless of the sewage he needs to step into.

Why he feels a need to do this is a mystery.

There is little Cox can do at this stage of his life (age 66) other than donate money, given he has no electoral track record. He seems to enjoy playing in New York politics, but there is really nowhere his attempts at making a splash will land him other than at the place he started.

There is no legacy for Cox other than his White House wedding to a president’s daughter. It has always perplexed me why everyone seems to know that except Cox himself. And he is bright enough to figure this out.

Surely Tricia Nixon had the chat with him about this matter.

The list of contributors to Walker linked in the source post also includes the new father-in-law of Cox's son -- though he was less generous than Cox himself.