Nixon At The Carpool 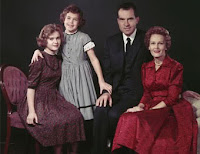 An independent educator's view of Richard Nixon, according to columnist Mark Shields:


My daughter, Amy, attended, some 30 years later, the same Washington, D.C., high school, Sidwell Friends, that Richard and Pat Nixon's daughters, Julie and Tricia, did. They had the same history teacher, the late Harvey K. LeSure Jr., who from time to time used to comment (usually kindly) on things I had written or said.

After Amy Shields' high-school graduation, I took LeSure to lunch, where I asked him, among other subjects, about Richard Nixon. LeSure, a practicing Quaker, who after being rejected for the U.S. military because of his poor eyesight had become a medical corpsman and surgeon's assistant with the British Army in North Africa, gently noted he was "never a political fan of Mr. Nixon."

But, ever fair, LeSure offered this more complete portrait of the man. Richard Nixon, I learned, "drove his daughters' carpool" and, as vice president, would come out after school to watch Julie play field hockey. Mr. and Mrs. Nixon could always be depended upon to chaperone the school dances, and he frequently wrote notes of encouragement or condolence to members of the school community.

This was clearly not the Richard Nixon I had in mind. Harvey LeSure summed: "I knew Nixon as a father, and he was one of the best" (an observation which could explain Julie Nixon Eisenhower's tireless public defense of her father during Watergate).

The more we learn, the less we realize we knew. Take that mean-spirited revisionist hacks.