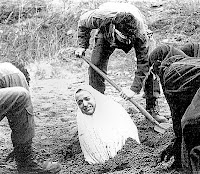 When it comes to women's rights in Arab and Muslim societies, Max Fisher argues that Mona Eltahawy paints with too broad a brush:


If that misogyny is so innately Arab, why is there such wide variance between Arab societies? Why did Egypt's hateful "they" elect only 2 percent women to its post-revolutionary legislature, while Tunisia's hateful "they" elected 27 percent, far short of half but still significantly more than America's 17 percent? Why are so many misogynist Arab practices as or more common in the non-Arab societies of sub-Saharan Africa or South Asia? After all, nearly every society in history has struggled with sexism, and maybe still is. Just in the U.S., for example, women could not vote until 1920; even today, their access to basic reproductive health care is backsliding. We don't think about this as an issue of American men, white men, or Christian men innately and irreducibly hating women. Why, then, should we be so ready to believe it about Arab Muslims?


Some of the most important architects of institutionalized Arab misogyny weren't actually Arab. They were Turkish -- or, as they called themselves at the time, Ottoman -- British, and French. These foreigners ruled Arabs for centuries, twisting the cultures to accommodate their dominance. One of their favorite tricks was to buy the submission of men by offering them absolute power over women. The foreign overlords ruled the public sphere, local men ruled the private sphere, and women got nothing; academic Deniz Kandiyoti called this the "patriarchal bargain." Colonial powers employed it in the Middle East, sub-Saharan Africa, and in South Asia, promoting misogynist ideas and misogynist men who might have otherwise stayed on the margins, slowly but surely ingraining these ideas into the societies.


The fact that feminism is broadly (and wrongly) considered a Western idea has made it tougher for proponents. After centuries of Western colonialism, bombings, invasions, and occupation, Arab men can dismiss the calls for gender equality as just another form of imposition, insisting that Arab culture does it differently. The louder our calls for gender equality get, the easier they are to wave away.

So Arab men, like men everywhere, prefer being in charge. They justify their behavior by means of the literal dictates of medieval Islam and the traditions they learned from colonial oppressors. If western critics are too aggressive about pointing out that it is wrong to keep women down, the men will complain that an imperialistic foreigner is trying to dictate to them, giving them further warrant to dictate to women.

The problem with this kind of cultural and historical argument is that an oppressive class often comes to power for complex reasons and then offers equally elaborate justifications for maintaining the status quo. When the outside world begins to raise the issue and the ante, the oppressor can get away with playing the victim of the foreign interloper for a while, but not forever. No arguments such as Fisher's are considered acceptable anymore when it comes to justifying or defending, for instance, slavery in the American south or South Africa apartheid.

Fisher also objects to the use of the word "hate" to describe centuries of misogyny. Did white South Africans and U.S. southerners hate blacks? What do you call generations of relentless abuse? "Hate" came naturally enough to those opposing California's Prop. 8, which banned gay marriage. But when it comes to the oppression of women, Fisher claims, we still have to walk on eggshells. He's right that misogyny is part of being human. Like its near relation, homophobia, it seems to come from a darker recess of our nature than racism does. But eventually, even Arab women -- women everywhere -- will say, "No more."
By Fr. John at 11:00 PM