How The West Lures Palestine's Christians Away 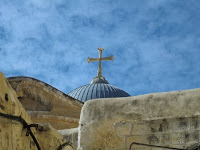 Less than a century ago, Khaled Diab writes, 10% of Palestine's population was Christian. Today, the Christian population is four percent in the West Bank, 2.5% in Israel, and one percent in Gaza. Diab says they're leaving not because of persecution but as the result of the Israel-Palestinian conflict and also because, according to one of the authorities he quotes, Christian faith often trumps national identity. Their Western partners and friends are evidently playing a role:

“I think that an awful lot of well-meaning Christians in the West, whether they are in America, Britain or other places, have poured a lot of money into the West Bank, and specifically into the churches and ministries here,” observes Richard Meryon, director of Jerusalem’s Garden Tomb, which is locked in a spiritual/territorial dispute with the nearby Church of the Holy Sepulchre over the exact location of the crucifixion, burial and resurrection of Jesus.

This outside aid, he notes, “is causing a hemorrhaging of Palestinian believers,” because many are given assistance to move to the West to study but, once there, decide never to return.

As for the validity of the Garden Tomb's claims, which date from the 19th century, check here and draw your own conclusions. The preponderance of modern scholarship favors the Church of the Holy Sepulcher (photo above by Kathy O'Connor). During our St. John's pilgrimages we've found that evangelical Christian groups tend to favor the Garden Tomb. The ancient, ornate Holy Sepulcher, where monks chant and incense billows, is run by the Roman Catholic and five orthodox churches. The Reformation ain't over till it's over.
By Fr. John at 9:54 AM