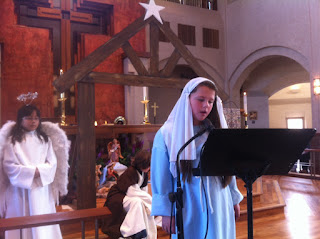 After Sunday's wonderful Christmas pageant at St. John's (that's Brenna Hayden, as Mary the mother of our LORD, singing a solo as angel Emily Salvanera watched beatifically), we skipped the readings appointed for the fourth Sunday in Advent, which were all about paradox and perplexity, just like the Incarnation -- God spurning the mighty temple King David wan 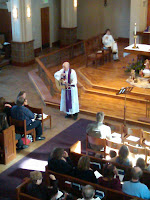 ted to build, the astonishing miracle of St. Paul's universal ministry in the hidebound first century, and especially the Annunciation.

Here's the song I offered instead. I wish I could hum it for you. I probably wish this more than you wish to hear it. The congregation graciously joined in on the chorus. Think Calypso. Thanks to Andy Guilford for the balcony-eye photo:

[chorus]
We love Christmas, but here’s the thing
How can a baby be a king?
This Bible stuff, it seems to us
Is sometimes too mysterious

[2 Samuel 7:1-11, 16]
Joseph descended from David’s throne
Capernaum was his stepson’s home
No saint ever lived in poverty
Who understood that grace is free

[Romans 16:25-27]
You’d have found Paul too intense
The job God gave him was immense
The equity we still aim to achieve
In the apostles’ time, an impossibility

[Luke 1:26-38]
Love that transfigures time and space
Revealed at a single hour and place
The favored one’s perplexity
Should daily happen to you and me
By Fr. John at 1:07 PM

Love the Calypso carol, have been humming it all week. I think we may have a new classic here! ♪ Mmm mm mm mm mmm mm mmm ...♫♪