Where This War Ends 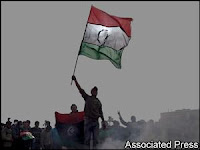 Andrew Sullivan is alarmed as a result of news about President Obama's no-longer-secret Libya finding and the possibility of the U.S. arming anti-Qaddafi rebels:

If we are not there for regime change imposed by foreign powers, as the president has insisted, on what grounds is this even being discussed? Okay, we prevented a massacre; and we will continue to prevent massacres from the air so far as is possible under UN 1973. That is a noble, if risky endeavor.

But that emphatically must be where this war ends. No arms, no troops, and no more CIA shenanigans (God help us).

This secret shift to full-on entanglement is also, to my mind, a well-meant but ill-conceived undermining of the Arab Spring. Regime change by force of foreign arms is not a democratic revolution; it is the imposition by foreign powers of their agenda in the service of groups we do not know or understand - and will never know and never fully understand. It actually wrests power away from Libyans and gives it to Westerners, perpetuating a dependency the Arab spring has finally been able to break from. It is, to put it simply, messing with the momentum of history, the real balance of power in the region. And if this has been done covertly already, if the president has bypassed Congress, the American people, and the UN and has already secretly armed the rebels, then we need to get more than angry. To have a third war foisted on us - this time by by secretive fiat - requires serious protest from the president's core supporters more than anyone. This nascent war needs to be nipped firmly in the bud.

Have these people learned nothing? This is a dumb war, as someone once said. And it could wreck, derail and distract Obama's presidency.