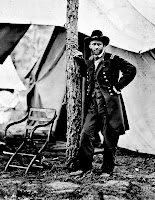 In a new book, historian David Goldfield asks whether the sin of slavery in the U.S. could have been erased by some means short of the savagery of the Civil War. Reviewer and Columbia University professor Andrew Delbanco thinks not, though he does see a correlation between U.S. Grant's bloody times and today's take-no-prisoners, unconditional- surrender politics:

Throughout Goldfield’s book, one sees the present peeping through the past. In his allergy to the infusion of religion into politics, and his regret over the failure of government to achieve compromise, he sometimes seems to be writing as much about our own time as about time past. Yet even looking through his eyes, one finds it hard to imagine that the post-Civil War constitutional amendments by which black citizenship rights were advanced could ever have been ratified if the slave states had remained in the Union. The “secession war,” as Walt Whitman called it, would seem to have been a necessary prelude to the process of securing black equality — a process still unfinished ­today.

Was there ever another war fought by one side for independence and slavery?

The Southern cause only gains legitimacy if the slaves were accepted as a separate sub-human species.

Lincoln is accused today of not having been anti-slavery enough at the beginning of the war. This book suggests, it seems, that he was too bellicose at the outset in not compromising on the territorial expansion of slavery.

I can see how a powerful case can be made that WWI (to paraphase Seinfeld) was a war about nothing. But the tragic Civil War was a necessary as WWII.

Andrew Johnson, unfortunately, made a perfect mess of the outcome. He should have been impeached and convicted of undercutting the 13th Amendment, not the silly bit about firing a cabinet officer without congressional approval.