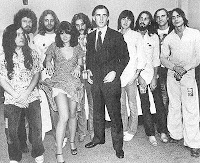 I do see what the reporters, Evan Halper and Michael Mishak, are driving at. As GOP registration numbers decline, Republicans are relegated t0 a seeming structural minority in the state legislature. Those wanting to do more than be obstructionists end up working with the majority, which results in centrist outcomes that conservative purists consider as bad as purely liberal ones -- worse, because they're even more likely to be enacted.

And so with the state facing the prospect of bankruptcy, a few brave Republicans were willing to talk to Brown about massive budget cuts in exchange for an agreement to continue some expiring taxes and put new taxes on the ballot. It's not that these GOP apostates were voting for new taxes. It's just that they were willing to let us do so. Given Californians' recent disinclination to raise taxes, it would've been a pretty safe bet.

But the purists won, and Brown ended negotiations this week. That's where the Times article comes in. Let's see what the GOP can accomplish in the broad public interest with 30% registration, dwindling numbers in the legislature, and no statewide office holder about the Board of Equalization. And folks, it had better be good.
By Fr. John at 7:10 AM