Will Egypt Be Democratic For Its Women?

Freedom will begin to die if people like CBS News' Lara Logan ever stop running the risks of battlefields and revolutions. Journalists who are attacked or injured while keeping us informed deserve to be called heroes no less than the volunteers in our armed forces.

Sneering at media victims or saying they asked for it is unforgivable. Andrew Sullivan and Jeffrey Goldberg rightly castigate those on the left and right who have slipped beyond the pale in their commentary about the sexual assault Logan suffered. And yet (how best to put this, since my question was prompted by one of the slobs Sullivan and Goldberg quote?) I wonder if the media are being attentive enough to women's interests in their coverage of the upheavals in the Arab world.

Was anyone raped by a gang of men in Tienanmen Square in 1989, for instance, or in Chicago or Paris in 1968? You might reply that it's not fair to Egyptians to try to make the a 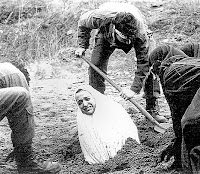 ttack on Logan emblematic of a larger problem with gender in their society. Yes, a significant though still relatively small percentage of the demonstrators were women. Women are much better off in Egypt than Saudi Arabia.

Yet 82% of Egyptians still believe that adulterers should be murdered -- and please tell me the last time you saw a photo or video of a man being stoned to death in the Islamic world. Only 41% of Egyptian men believe women should be allowed to serve in top government positions. CBS itself wrote of the indignities women usually suffer on the streets of Cairo, adding that demonstration organizers took care to minimize these in Tahrir Square. Was that just for the sake of Western media crews such as Logan's, ironically enough? We certainly wouldn't fall for it if habitual abuse of members of an ethnic minority was being hushed up for PR purposes.

The attack on Logan should help us remember that Egypt is having a mostly men's revolution to decide which new group of mostly men will be in charge next. Does the U.S. have its political house in order when it comes to gender equality? Not by any means. Our racial politics still usually come first. Gender even took a back seat when we were debating the lower Manhattan cultural center and mosque. But it ought to be worth an occasional mention that we're considerably better off than Egypt and that the democratic ideal toward which it and other mostly Muslim countries are finally straining grows from the radical equality of all people, especially men and women.
By Fr. John at 12:59 PM

Good discussion on such a disturbing and so often ignored or repressed issue. The news of Lara Logan's attack was chilling. The ramifications and implications of it even more so.

"82% of Egyptians still believe that adulterers should be murdered." Not true. What is true is that 82% of Egyptians still believe that adulterers should be executed. Execution is not murder. If execution were murder, then God first forbids murder in Exodus 20 and then commands it in Exodus 21. Therefore punishing someone with death for his/her crime is not murder, but execution. God didn't "murder" Onan for spilling his seed upon the ground. God doesn't "murder" anyone -- their lives are his to give and take as He sees fit. Nor does anyone "murder" who is duly authorized on God's behalf to execute justice and does so in the course of his duties, as Paul said of the secular authorities, "...he is the minister of God, a revenger to execute wrath upon him that doeth evil." (Rom 13:4)

And let's face it: We'd have a lot less adultery in the world if people were willing to see it punished, if not by execution, then at least in some way, shape or form. I myself favor criminal penalties for extramarital sex, with additional penalties if either party is married. For thousands of years, no one had a problem with this mindset. Our shying away from punishing fornication is a product of our decadent culture. This is one area in which we ought to learn from Muslims rather than rebuke them. They shame us by their zeal against adultery, which we by and large have accepted in spite of God's naming it a capital offense. If they are to be faulted, it is not for their zeal, but only in that their zeal is not equitably applied to men and women.

I used "murder" because I think killing people because of adultery or for leaving one religion for another (also favored by four out of five Egyptians) is a sinful abuse of the power of the state. If the Soviet Union had executed a dissident for treason, I would also have called it murder. The Chinese called their June 1989 attacks in Tienanmen Square a legitimate police action by a sovereign government. Most in the west called it mass murder.

In the Muslim world, adultery killings are usually twinned with the additional sin of misogyny, since it's usually women who are being killed.

When they engage in these practices, Muslim authorities have nothing to teach us about justice or the right relationship between men and women as was ordained by God.

You're absolutely right that society doesn't take the sanctity of marriage or sexual relations seriously enough. I wish I had something wise to suggest other than that parents, religious institutions, schools, and our cultural and political elites should be better teachers and exemplars.

"I think killing people because of adultery or for leaving one religion for another...is a sinful abuse of the power of the state."

Yet the Mosaic Law required that adulterers and those who would evangelize others away from God were to be killed. Are you saying that God was authorizing abuses of power in the theocracy that He Himself established for Israel?

Remember, "separation of church and state" is a novel idea that grew out of the Enlightenment. It is not a biblical concept any more than "democracy" is a biblical concept. The closest thing you ever see to democracy in the Bible is (1) the call of Israel for a king -- which turned out badly -- and (2) the Council of Jerusalem, in which the final decision was still made by an apostle (i.e., a person hand-picked by God to have authority).

"You're absolutely right that society doesn't take the sanctity of marriage or sexual relations seriously enough. I wish I had something wise to suggest other than that parents, religious institutions, schools, and our cultural and political elites should be better teachers and exemplars."

I just gave you such a suggestion, though you may question the wisdom of it: Pass laws forbidding extramarital sex and assign real penalties to the breach of these laws. If it is legal to punish prostitution, then there is nothing in the law which should prevent us from punishing sex that occurs in the absence of a financial transaction....Well, I say that, but then I recall that Lawrence v. Harvey ruled state sodomy laws unconstitutional, so maybe that's not true. If that's the case, it would probably take a constitutional amendment saying, "No person outside of legal wedlock may engage in sexual relations," and how likely is THAT to ever pass? (In which case we may as well legalize prostitution and tax it for revenue, seeing how we've already thrown all societal impetus for sexual morality out the door. As I once read a woman say in an article, "I can take a stranger home with me tonight and rock his world and not get so much as a slap on the wrist...but heaven forbid I should accept money from him for the favor and write him a receipt!")