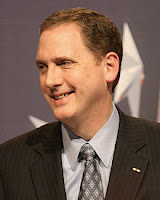 A lively debate at "LiberalOC" between a former GOP assemblyman from California, Chuck DeVore, and blogger Chris Prevatt over whether DeVore should have been prosecuted for conspiring to disrupt a Muslim Student Union event at UC Irvine on 2007.

h that was allegedly planned by 11 UCI students in February 2010. Thanks to Orange County DA Tony Rackauckas, the students are now under indictment and facing up to six months in jail.

The DeVore-Prevatt exchange about the technicalities of the law against disturbing or breaking up public assemblies doesn't convince me that DeVore should have gone to jail. It does makes it all the more clear that the 11 students shouldn't, either.
By Fr. John at 8:44 PM

Watch the YouTube of the disruption by the Muslim Student Union 11 -- it's intense and intimidating. Further, it represented simply the latest in a string of campus violations of others' free speech.

I'll bet it was, assemblyman -- just like all the dumb stuff I saw on campus during and after the Vietnam war. If they had indicted everybody back then, we'd still be conducting the trials!

Thanks for your comment and your service. I have pleasant memories of participating in a Constitution Day program with you in Buena Park a few years back.