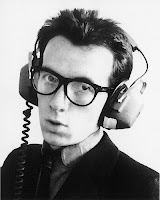 Another reason to love Elvis Costello: His influences, according to Nick Paumgarten's wonderful profile in the Nov. 8 "New Yorker":

His [jazz musician] father turned him on to the Grateful Dead, which became Costello's band, in part because it was no one else's. (While Costello makes no apologies for his Deadhead phase, his biographers always seem to.) It was through the Dead, and subsequently the Band and Gram Parsons, among others, that he discovered the traditional American music they'd tapped into, such as Hank Williams and Merle Haggard. This in turn became the foundation, along with the likes of Van Morrison, for the kind of music he was starting to write and perform himself...The Band's Rick Danko was a major influence on Costello's style of singing.