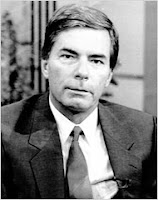 Did the LA Times buckle to CIA pressure? That's what former Times reporter Murray Seeger asks in this article at "Washington Decoded" about notorious agency defector Philip Agee (shown here), who died in Havana in 2008.

In January 1976, Seeger filed a story alleging that Agee had given the Russians the name of an agent in Warsaw, enabling the Polish communist government to shut down a whole network and make 120 arrests.

That would've been big news. The year before, Agee had published a book naming 250 U.S. agents and contacts. Former CIA director and president George H.W. Bush called him a traitor, and some alleged that his actions resulted in the death of the CIA's Athens station chief, Richard Welch, who was assassinated less than two months before Seeger filed his copy. Agee denied having done anything to bring about Welch's killing.

In any event, Seeger's story never made it into the pages of the Times, but thanks to the British Guardian, Agee got to deny it anyway. Strange as a spy novel! The two Timesmen Seeger mentions were colleagues of my mother during that era, associate editor Jean Sharley Taylor:

I am convinced that Bill Thomas, the LAT editor, had issued a “kill” order on my story after talking to CIA headquarters. I had known Bill a long time and liked him, but I also felt he was gutless. In 1974, he acceded to an agency request to hold his reporter’s story about the CIA effort to recover a sunken Soviet submarine from the Pacific Ocean until other newspapers discovered the story.

Earlier this year, I asked Thomas, now in retirement, if he remembered talking to the agency about my story, and he answered he did not remember the Agee story and had no access to his office records. Bob Gibson, the foreign editor, never responded to my e-mail questions.