Yes Without The Possibility Of No 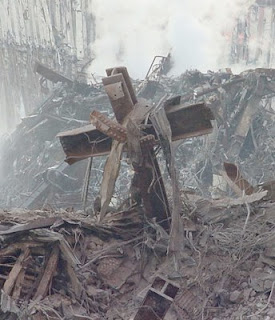 My Episcopal clergy brother, the Rev. Canon Robert J. Gaestel, rector of Church of the Angels in Pasadena, is also a police chaplain. Preaching on Sept. 11 at the Episcopal Theological School at Claremont, he probed the correlation between the work of clergy, cops, and the Cross. An excerpt from his sermon:

The real stress of law enforcement is not weird hours, having to work on Christmas, or negative contacts with the public. The real stress is living at the boundary where order collapses in a matter of moments. It is something most people will never experience.

What was September 11 but the complete breakdown of order, a breakdown that led to horrendous destruction and death? I remember my wife Tracy coming to my office and telling

me that the country had been attacked. I could not comprehend what she was saying. What did it take to restore order? A lot of people gave up their lives, people in public safety, people on Flight 93.

What is the Cross but the paradox of chaos and order in the same place? The Cross is the ultimate loss of safety and truth because on it we seek to destroy and we succeed in destroying the one who for us is ultimate safety and ultimate truth. We destroy the source of ultimate order thinking that by doing so we are restoring order. Jesus is accused of threatening the order of both Judaism and Rome. To put Christ to death is to impose and preserve order. But putting Christ to death is to destroy the only source from which all order comes and where it all leads.

The Cross is truly the sum of all fears, the worst that can possibly be done. It is the triumph of chaos over order, the ultimate suicide bombing. We suddenly behold that, that which we suffer is that which we perpetrate. We human beings are the ones who fly the planes into the buildings and we human beings are the ones who perish at our own hands, all the while thinking taking control, we are imposing order.

Yet in the further paradox no one could imagine until it actually happened, when chaos exacted its full measure, in the moment of its triumph, it destroyed itself. A life threatening illness like cancer, at the moment of its victory, being the moment its victim dies, it dies too.

That’s what St. John in his account of Christ’s Passion saw with absolute clarity. The moment when Christ was lifted up, he would draw all to himself. In the moment of his death, Jesus is glorified, that is revealed for who and what he really is. And when all was said and done, and nothing more could be done, what remains is yes without possibility of no, of life with no death at all, because what remains after we have done our worst is the Risen One.