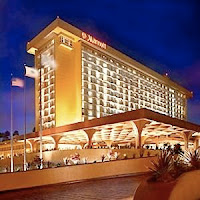 I spent eight hours in the Marriott Hotel near LAX Friday night, waiting to collect Kathy, who was coming in from Hawaii at 5:30 this morning. Last night the server in the sports bar graciously directed me to the tastiest item on the menu (the buffalo chicken salad). Four front desk folks wished me goodnight, with big smiles, as I walked past after dinner. When I called an hour ago to say I'd left my appointment book in my room, the woman who answered the phone in housekeeping sent someone to look and called back within ten minutes to say they'd found it.

My first thought, and it's a correct one, is that it's a well-run place. So bravo! But here's a sacramental explanation. I was staying there thanks to a church friend who secured the room using her late husband's Marriott points and put my name on the reservation along with his. When I arrived and got my key from the woman at the front desk, she said in passing that my friend hadn't checked in yet. Well, that depended on how you looked at it, since he's currently making up a room and stocking the minibar with well-strained wines strained clear for his beloved wife (see Isaiah 25 and John 14 for the details). On his last night of conscious life, after a year-long battle against brain cancer, he asked me how I was doing. He was the very soul of the hospitality with which, last night, a bustling inn full of strangers was alive.
By Fr. John at 11:04 AM

John, you are so poetic! You brought tears to my yes and a smile to his face! He would have loved this story!