"Unlikely" Doesn't Begin To Say It 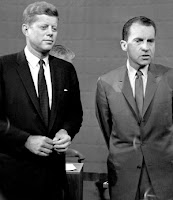 JFK speechwriter Ted Sorensen on what's changed in politics since the first Nixon-Kennedy debate 50 years ago:

Though it seemed at the time to be a battle between two opposing worldviews, the truth is that the two candidates did not vastly differ in that first debate. And while Kennedy would probably find a home in today’s Democratic Party, it is unlikely that Nixon would receive a warm welcome among the Tea Party.