We Need The Whole Story On Torture 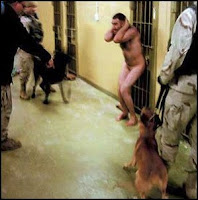 I'm against torture (who isn't?) in any but the most exigent situations, namely everyone's favorite hypothetical, the highly unlikely scenario of having someone in custody who otherwise won't say where the ticking nuclear device threatening hundreds of thousands of lives is hidden. But as the Obama administration releases the Bush-era memos providing legal justification for severe interrogation techniques, I just don't share the passion of Andrew Sullivan and others who favor prosecution of top officials.

To be more precise, I share their concerns but not their anger. After all, the Bush administration calculated that the U.S. faced an existential threat after Sept. 11. They promised the American people that they'd do anything in their power to protect us, and by and large, we were happy to hear it. Allegations that in the process of keeping the promise, the government put itself in the same moral position as Nazis, or even that our democracy was measurably eroded, seem discredited by the results of the 2008 election.

Had there been another attack on the scale of 2001's, we would not be looking at these memos, and we would probably have a different President. Did George W. Bush overestimate and lawlessly overreact to the threat? Or did he meet it so successfully that we now feel safe enough to scapegoat him for his tactics?

There's no question that the memos sound weasel wordy and opportunistic. This image of waterboarding from a museum detailing the crimes of the genocidal Khmer Rouge is especially ironic.

Still, if the Bush policies have been rolled back by his freely elected successor, what exactly is the purpose of a legal witch hunt? Instead, I'd favor a blue-ribbon panel of some kind, given the charge of guiding future administrations. But its members, and to the extent possible the public, should see evidence of all the plots that were thwarted or didn't succeed for some other reason. Ideally, we should know everything Bush knew before we decide he went too far while protecting us. We have a responsibility to make sure we know what was done in our name, legally or not. We also have the right to know why.
By Fr. John at 5:59 PM