Obama Had To Shoot Them, Hannity Says 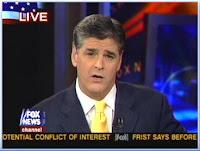 Untethered from the long suffering Alan Colmes, his erstwhile liberal conversation partner, Sean Hannity is on the verge of becoming a parody of himself. If President Obama cured cancer and won the Masters, Hannity would criticize him for neglecting Alzheimer's Disease and excelling at a sport invented in a foreign country. The American pastime not good enough for you, Mr. President?

Obama deserved praise for skillfully navigating the relatively minor but potentially tragic hostage crisis off the Somali coast. If the situation had gone south, Hannity would've been all over him like a cheap suit. Instead, grasping for any means of depriving Obama of credit for a win, Hannity misconstrued this reporting by "Politico":

Obama's involvement in the decision to authorize lethal force was legally required, officials said, because it was a hostage situation, not combat, and unrelated to the already authorized U.S. effort against Al Qaeda and other terror groups, officials said.

On his new all-Sean-all-the-time show tonight, Hannity was so desperate to bring Obama down a peg that he implied to listeners that the President was legally required to authorize the Navy snipers to act. Instead, the "Politico" passage means that Obama's personal involvement was necessary, whereas it wouldn't have been in a military operation. In other words, "Politico"'s reporting makes Obama look stronger for ordering the use of lethal force.

It was disappointing that Hannity actually seemed to want to mislead his viewers. His guest, media critic Bernard Goldberg, a persistent Obama critic, said as much, to Hannity's frustration. Goldberg said that he didn't want to behave the way some of President Bush's liberal critics did when they refused to give him credit for doing anything right. Sorry, Bernie, but Hannity intends to behave exactly that way.
By Fr. John at 8:55 PM