A Prayer On Both Your Houses 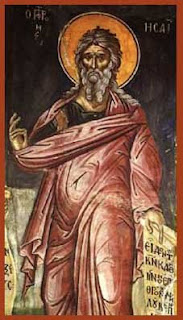 E. J. Dionne, Jr. (that's Isaiah at right, not E.J.) argues that the increase in the percentage of Americans who say they aren't religious is related to the pervasive association of Christianity with the evangelical, politically activist, generally Republican faction of the faith:

Religion is always corrupted when it gets too close to political power. It's possible to win a precinct caucus and lose your soul, to mistake political victory for salvation itself.

While he may be right, he overlooks what happened a generation or two ago to the mainline Protestant denominations, which began to lose adherents as they become more closely associated with so-called liberal causes such as opposition to the Vietnam war and equity for women and gay and lesbian people. Would Dionne say that religion can be corrupted if it advocates too aggressively for politicians who support green energy and world peace instead of (as in the case of the evangelical cohort) oppose abortion?

As an alternative to spending its time and energy worrying about the swinging ecclesiastical pendulum, I would like to see the church simultaneously become more knowledgeable about politics and policy and yet less emotionally engaged in outcomes, which actually aren't our job. Studying Matthew's account of the Resurrection this Easter, I was struck by what happened to the guards (possibly Roman, but more likely working for the temple authorities) when the angel rolled away the stone in front of Jesus's tomb:

4For fear of him the guards shook and became like dead men.

Likewise, in Isaiah's Fourth Servant Song, which Christians take to be an anticipation of Christ, the prophet says:

Kings shall shut their mouths because of him.

That would be something to see, huh? Secular authority staring divinity in its face and being struck dumb with terror. Obviously the church has spent much of its life promoting fear and guilt, often in a self-serving and emotionally destructive way. And yet there is still something to be said for the fear of God (as opposed to fear of the Pope or parish priest). After all, continues Isaiah, God's ways are not our ways nor God's thoughts our thoughts. It seems to me that politics at its best is inherently cultural, the gospel inherently countercultural. So perhaps the church should be less focused on trying to refashion the state in its image than on modeling a radically different way of living, interacting, and building and sustaining community even in the throes of conflict.

Some in the church love justice, righteousness, and mercy so much that they find it unbearable when governments and political leaders don't do all they can do promote these virtues. The difficulty is that prophecy can breed pride, even zealotry. So today, prophetic Christendom is as fractured as politics, with one faction promoting justice for those who have been born and the other for those who have merely been conceived. Don't we see that in our divisions, we are aping the very secular leaders we so often scorn?
By Fr. John at 7:47 AM