So Much In Common 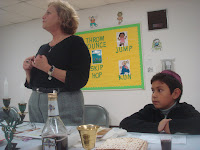 Faith Goldman, who attends St. John's with her beloved (and my godson), Harry Elliott, grew up watching her grandfather preside at her family's Passover Seder. He positioned a gold chalice on the table from which no one ever apparently drank, and yet by the end of the meal, it was always empty. Faith was a young woman before she realized that, when she and the other children had been sent outside to look for Elijah (whose return would presage the coming of the Messiah), grandpa would quickly gulp down the wine, like mom and dad consuming the goodies that kids leave out for Santa Claus. 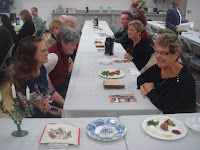 Faith revealed these and other mysteries during an hour-long teaching for 35 of us tonight at St. John's. It's an apt subject for any Christian community. Jesus Christ was probably presiding at a Seder on the evening of his betrayal and arrest. The ancient ritual, always conducted at home rather than at temple or in a synagogue, has many correlations with Holy Eucharist (aka the mass) -- candles, ritual hand-washing, the common cup of wine, the breaking of bread. When the middle matzo is broken, wrapped in linen, and hidden until being brought out again for dessert, Christians naturally think of Jesus's broken body laid in the tomb until Easter. As Faith read the ancient prayers, just as her grandfather had year after year, we heard the source of other familiar themes in our worship -- creation, forgiveness, trust, blessing, deliverance, God's abundant love, and above all thanksgiving. So much in common, we people of faith. Thanks, Faith!
By Fr. John at 10:25 PM