Don't Sell Him Out 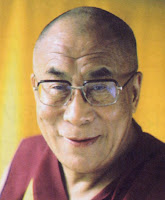 In February, Secretary of State Clinton put human rights on the back burner when it comes to our relations with the communist nation holding $1 trillion in U.S. paper. This week, a Sino-Franco group hug, reports the New York Times:

[T]he French authorities seemed to have stepped back from their previous readiness to antagonize the Chinese leadership as the world confronts a global economic crisis in which France can ill-afford poor relations with a global economic power-house.

Last year, President Sarkozy’s support for the Dalai Lama angered Chinese leaders. In response, China postponed a meeting with European leaders that France was supposed to host. At that time, France held the rotating presidency of the European Union.

China strongly opposes any encounters between foreign government figures and the Dalai Lama, accusing him of harboring separatist ambitions for Tibet, which he denies.

As well they should, the French have reaffirmed the one-China policy. Enshrined in the Shanghai Communique as negotiated during the Nixon administration, the one-China policy is also the basis of Sino-U.S. relations. But support for the Dalai Lama's bid for Tibet's cultural autonomy conflicts with the one-China policy only if you conclude, as Beijing claims it has, that this deeply spiritual, plainspoken, patient man is lying when he promises that he's not seeking political independence for his homeland.

A core Nixonian principle is that great nations don't hector one another in public if they have an interest in ongoing constructive relations. We should never assume that U.S. and French leaders aren't taking a stronger line behind the scenes. Let's hope so, because it may be bad for the soul to sell out a holy man.
By Fr. John at 2:31 PM